According to the Office for National Statistics (ONS), UK gross domestic product (GDP) shrank by 2.9% in January due to reimposed coronavirus lockdown restrictions.

However, the figure beat consensus expectations for an economic contraction of 4.9%, which has enabled investors to remain relatively optimistic about UK growth prospects into the second quarter of the year.

Separate data also showed that UK government bond prices fell, which is a welcome sign that the Bank of England (BoE) will be less likely to pump additional liquidity into the economy.

The slump in UK GDP was driven by the services sector, which declined by 3.5% in January, as hair salons, restaurants and retail stores were forced to close their doors again under the third national lockdown.

While the downturn fared better than the Q2 2020 slump – when the economy shrank by 10% – the ONS noted that the UK’s GDP is still 9% below pre-pandemic levels.

However, Britain’s lead in the race to immunisation is supporting the country’s recovery outlook. Previously, BoE officials said they expected the UK economy to shrink by approximately 4% in Q1 2021. However, economists have since made a downwards revision to this figure following today’s data and now predict an economic contraction of 2%.

Many British businesses have adapted to lockdown headwinds and increased their online footprint to operate under challenging conditions, as UK PMI for March proved to be much more upbeat than the previous month. UK construction PMI hit a six year high of 61.7, significantly improved from February’s figure of 53.3. Manufacturing PMI in March also saw substantial growth, reaching a decade high of 58.9 as the UK heads into Q2 in a much more promising position.

With UK Prime Minister Boris Johnson set to completely lift the third national lockdown by June 21st and Rishi Sunak’s recovery Budget pumping GBP 65BN into the economy, economists forecast a robust rebound in the second half of 2021.

However, Brexit remains a threat to UK GDP after ONS data revealed that exports and imports between Britain and the EU plunged at the fastest pace on record.

While some have said the figures could be painting a false depiction of reality as businesses stockpiled on goods ahead of the transition period, it’s no secret that many companies have faced supply chain disruption due to new Brexit rules. While ONS data revealed that trade picked up January-end, exports to the EU, excluding precious metals, plummeted by 40.7%, with overall exports tumbling by 19.3%.

The ONS also reported a 28.8% decline in UK imports, with the overall slump in exports and imports costing GBP 5.6BN.

Despite signs of trade disruption easing, Anneliese Dodds warned that the “practical difficulties faced by businesses on the ground go well beyond what Prime Minister Boris Johnson has labelled “teething problems”.

She added: “With the disruption to UK-EU trade flows persisting, trade is likely to be a drag on UK economic growth in the first quarter of 2021.”

The Shadow Chancellor of Exchequer said: “Mr Sunak’s mask has slipped. He’s making irresponsible choices now and has no long-term plan for the future. The people of Britain deserve better.”

Her comments come amid a growing uproar over the British government’s proposed NHS 1% pay rise, which health chiefs, unionists and Labour MPs have branded as a “kick in the teeth” for NHS staff who have risked their lives on the frontline to ensure national safety.

UK Prime Minister Boris Johnson said that a pay rise of 1% was all the government could afford due to the effects of the pandemic, but unions have threatened strike action if ministers fail to reconsider the proposal and offer a more significant salary increase.

Chancellor Rishi Sunak has defended the UK government’s recommended 1% pay rise for NHS staff, pointing out the UK’s debt crisis. The UK’s Sunak said the proposed 1% pay rise is part of a broader targeted approach to public-sector pay and will ensure that health staff on the lowest salaries will receive sufficient support.

The Chancellor admitted that he was concerned about rising unemployment and the UK’s debt crisis as rising interest rates could harm public finances.

Data and comments from the Treasurer also poured cold water on pound Sterling’s (GBP) advances as the UK currency continues to underperform against a host of its major trading partners, including the US dollar (USD) and the euro (EUR). The British pound (GBP) has slipped against its major currency rivals during the start of the new trading week as the UK’s vaccination campaign slows down following supply delays.

Renewed demand for the US dollar (USD) has also exerted pressure on the British pound to US dollar (GBP/USD) exchange rate as the outlook for the US economy continues to grow more optimistic.

Cable is currently trading at USD 1.38 as the currency pairing aims to reclaim the USD 1.40 level reached earlier this year.

Meanwhile, the British pound to euro (GBP/EUR) exchange rate is also lower this week at EUR 1.15, as the eurozone continues to battle its way through a third wave of coronavirus cases.

That said, GBP/EUR and GBP/USD weakness is likely to be temporary, as the UK looks to resume the speediness of the vaccination programme over the coming weeks and declining COVID-19 cases should help put a floor under pound Sterling (GBP) in the medium-term. 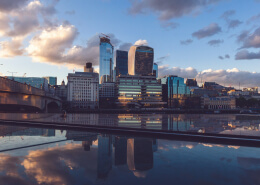