Reading Time: 5 minutes
You are here: Home1 / News2 / Education3 / How much are international students worth to the UK

How much are international students worth to the UK?

It was, therefore, met with great disappointment by higher education institutions when the UK government confirmed that the Erasmus scheme would be suspended post-Brexit. Although Erasmus will be replaced by the new Turing scheme, it’s thought that this will only cover UK students learning abroad and not international students looking to study in the UK. Costs and benefits for each international student by constituency

Among its main findings are:

The analysis in the report concentrates on EU and non-EU first-year students attending UK universities in 2015/16. The figures are presented in 2015/16 prices and are discounted to reflect net present values.

For the academic year 2019/20, according to Higher Education Statistics Agency (HESA), there were 556,625 non-UK students studying in the UK, compared to 496,315 the previous year. China continues to make up the majority of international students in the UK, making up 35% of all non-EU students 2019/20.

There has also been a substantial increase in the number of students from India to the UK, seeing an increase of 38,580 students over the past five years.

Linda Cowan, Managing Director, of Kaplan International Pathways, says, “In recent decades, the UK has been phenomenally successful in recruiting international students, second only to the US, with countries such as Australia catching up.”

Professor Graham Galbraith, Vice-Chancellor of Portsmouth University, says “the main beneficiaries of international students are spread right across the country – from Newcastle, through Liverpool, Leeds, Sheffield, Coventry, and Cardiff to Portsmouth. Encouraging international students to come to the UK and study should be central to the UK’s industrial strategy and a key part of supporting a global Britain post-Brexit.”

In addition to financial support, Linda Cowan stated that international students also fill skills shortages within the UK. “Given their high level of English competency and impressive academic achievements, we should be doing everything possible to encourage them to stay and work here. To do this, we need to reinstate attractive and competitive post-study work rights for all international students. “

Higher education institutions are also concerned that further post-Brexit rules and regulations could deter European students from entering the UK going forward. New post-Brexit regulations state that EU students studying in the UK are to pay over GBP 1,000 in healthcare surcharges and then apply to claim it back. However, MPs are urging the UK government to remove such rules in what they are labelling as a ‘red tape nightmare’.

It’s hoped that any unnecessary post-Brexit regulations impacting international students will be ironed out over the coming year to continue to make the UK a desirable place to work and study. 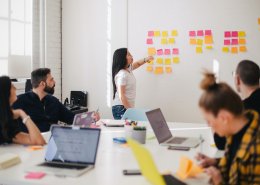